I had heard of Tim Tebow, but never seen him in action until watching the Broncos play the Steelers last Sunday afternoon. Tomorrow we will see if he can come up with another win over the Patriots. But win or lose, Tim Tebow has got a lot of people either admiring his stand for Christ or hating it.

I was pleased to see his famous T-bow at the end of that game. I have heard that some players have mocked him when scoring against him or when he lost a game by making a similar gesture as a sarcastic joke.

One has to wonder how different it would have been if Tim Tebow were a Muslim and after each victory had bowed down Islam-style facing Mecca. Who would be mocking him or making snide comments on public media? No one would dare! It would be considered politically incorrect. And could even put the offender's life in jeopardy.

Someone posted a comparison of two pictures with these subtitles:

Tim Tebow’s “Te-bow” immediately reminded me of the almost exact position shown in the famous painting of General George Washington who was not ashamed to be a Christian when he knelt in the snow and prayed for his troops during the revolutionary war… while his ragged, tired men fought for freedom of religion, freedom of speech and freedom from undue taxation under the rule of the king of England. Years ago almost every school child used to see that painting displayed in his school room or in his school books. 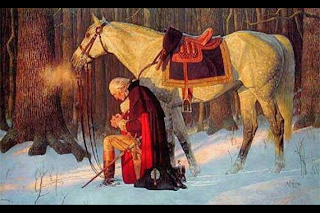 Today our history books are being rewritten. It seems that atheism has become the official religion of the publishers of educational material placed in the hands of our children in public school. America, where are we headed? An obvious effort is being made to destroy the Christian foundation upon which this nation has been built.

So let's take a look back at our first president doing the T-Bow... or as my friend, Tim Weeks, suggested... "Tim Tebow doing the George Washington bow" since he became famous for his Christian bow first.