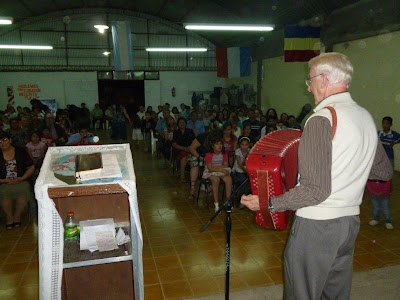 After a great service at Pastor Hugo Perez’ church last Saturday night, his daughter, Eliana, and her husband, Maxi Barrios met me outside the church as I was leaving. They showed me a small scar on the right arm of their little son, Micaias, and told me the story of this unusual miracle.

Eliana was 7 months pregnant with Micaias. They had parked their little motorcycle in front of a place that sells fast food. Eliana stayed with the motorcycle while Maxi went in to purchase some sandwiches. Suddenly Eliana was approached by an armed robber who demanded the key to the motorcycle. She told him that her husband had the key. He shot her through the womb and was preparing to shoot her again when Maxi came up. Eliana was kneeling in blood in the street yelling at the robber. “My baby! My baby! You just killed my baby. Why do you want to kill me, too?” Maxi gave the robber the keys and he did not shoot again, but sped away on their motorcycle.

They rushed Eliana to the hospital and operated immediately. The baby was alive and only showed an injury in one arm. The doctors saw where the bullet had entered her womb, but were puzzled because they could not find where the bullet stopped or where it exited. They were shocked to discover the bullet lodged in baby Micaias’ tiny right arm. It did not break the bone or do serious muscle damage. 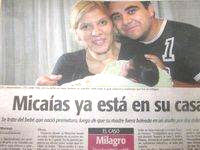 They claimed that if the baby had not stopped the bullet Eliana most likely would not have survived. Their story hit major news all over the country. On a television show Maxi and Eliana publically forgave the robber who shot her. Soon thereafter the repentant robber returned the motorcycle to the place where he had taken it. He was later apprehended and is now serving a 10 year sentence in prison.

Can an unborn baby’s arm stop a bullet? All over Argentina it was publicized as The Micaias Miracle.

Note: Pastor Hugo Perez tells me that 44 years ago he heard me playing the Hawaiian guitar in the city park where I preached every week and came close to see this strange instrument. He did not stay to hear me preach however. Years later he and his wife were invited by a neighbor to a home meeting. I happened to be visiting San Juan that day and preaching in that house. That night they both gave their hearts to the Lord. Several years later, with the approval of their pastor, Angel Vega (Pastor of the first Assemblies of God church which we helped to plant here in 1968) they started a church in another area of the city. Today it is one of 10 thriving Assemblies of God churches in San Juan.

Ralph
Posted by Ralph Hiatt at 8:20 AM