It's a true story. I was just a wild teenage kid, full of mischief. 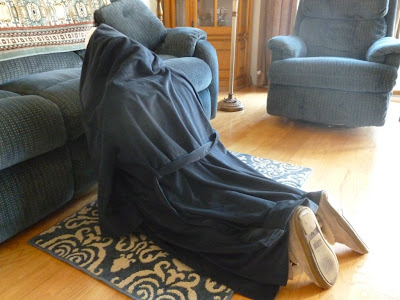 Almost every morning I awoke to the monotone voice of my father downstairs kneeling at the living room couch praying for his family. Daddy worked hard. Much of the time during the depression years he held down two full-time jobs... 16 hours a day! But Daddy arose early enough in the morning to take time to kneel in prayer. My oldest brother and sister were already out of the nest. My two remaining sisters and I slept upstairs. Sometimes we would come down for breakfast before Daddy left for work and we would find him covered with his bathrobe kneeling in prayer.

One day Daddy had already left, but I got an idea. I took some pillows and made the form of Daddy kneeling at the couch and put his bathrobe over it and his slippers showing behind it... something like the picture above. I snickered inside as I saw my sisters come down and tip-toe around not wanting to disturb Daddy at prayer. When they finally discovered the "fake man in prayer"... they chased me all around the house and I laughed and laughed.

Years later I realized that I could never have pulled off that trick if I had not had a Daddy that upheld us in daily prayer. What a heritage!

A friend of mine just visited their grandson in jail. He had a very abusive father. He hardly had a chance in life. Where would I be today if my parents hadn't given me that precious gift of a true Christian heritage?

What Happened on H Street?

I prepared this for Valentine's Day weekend and forgot to publish it. You are looking at some of God's choice servants doing "Jesus-stuff". 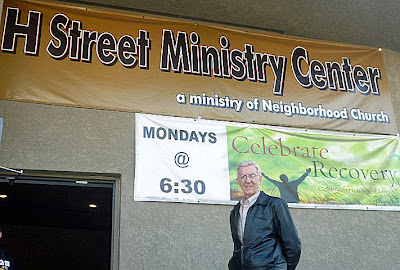 H Street? What's that about? It’s “Celebrate Recovery” for adults. It’s Tony and team giving out tons of free groceries for the needy on Wednesdays. It’s hope for the hopeless... as counselors introduce broken lives to Jesus. It’s Saturday Bible Classes for kids. It’s Jesus’ love in action. It happens in a building purchased by Neighborhood Church in a needy area of Modesto with the purpose of blessing everyone from little kids to the homeless in that area.

Today my son, “Pastor Tim” asked me to join with my grandkids and the rest of the team from my home church, "Neighborhood Church Modesto". 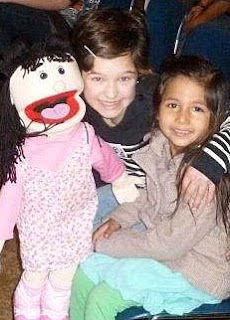 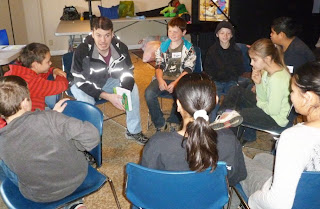 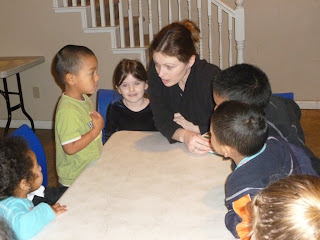 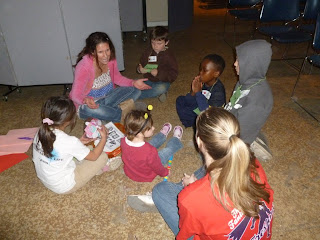 One teacher and class sat on the floor. 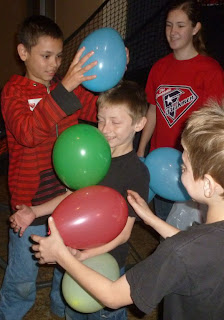 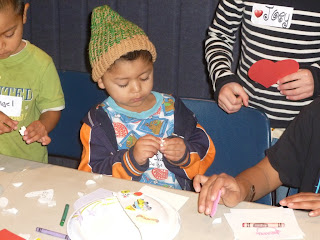 Making "I Love You" Valentine things for Mom... 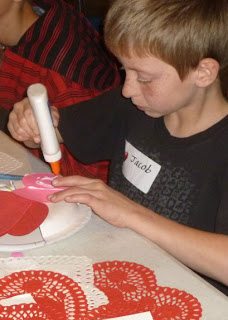 Lots of love for Moms and Dads... 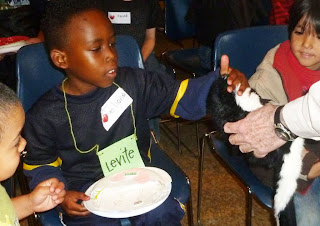 The "Pet Perfume, the Skunk" Ceremony... 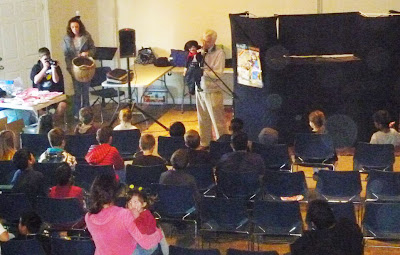 Felipe does his take on the Good Samaritan... "Walking... Walking..." 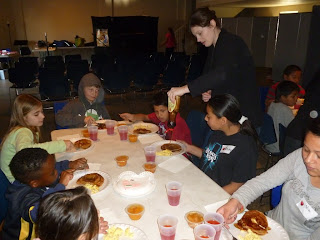 And that is what happens on H Street on Saturday morning. Amen!

Tonight I got a call from Argentina. It was Hugo. This time I recognized his voice and was delighted to hear about him and his lovely family. 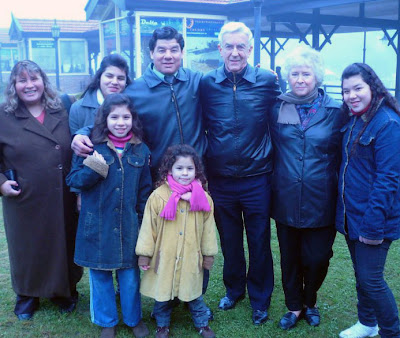 The first time he called me, however, (July 2006) I was amazed. I was visiting Argentina along with Frances while hosting a wonderful ministry team. All thirty of us were seated at a long table eating dinner in a restaurant in downtown Buenos Aires. I had a temporary rented cell phone and only a few pastors had my number. My phone rang. I answered. An unfamiliar voice on the line speaking Spanish of course, said, "Hello, this is Hugo." "Hugo? Hugo who?" (I knew a lot of Hugos.) "Hugo! Don't you remember me? I'm Hugo, the mechanic that used to repair your car for you. Don't you remember when your pickup had broken down out on the highway and you took me out there to get it started? Don't you remember that you talked to me about Jesus all the way out there? Don't you remember that you prayed with me to receive Jesus?" I was starting to remember, but that was 17 years earlier! "My wife heard you preaching today on the radio and I called the church for your number." Now his whole family was serving Jesus and attending one of our churches. 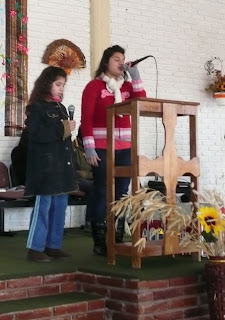 Later we invited Hugo to bring his family out to the island church. I shot the above picture of him with his wife and 4 girls on a very foggy morning just before we got aboard the boat for the 3 hour trip. Two of their girls sang a beautiful duet that day. And my heart was warmed.

Tonight I heard again from Hugo. Thanks, Lord. You warmed my heart once more tonight! 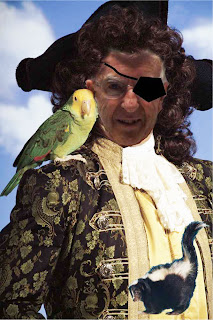 I have received many encouraging responses to my blogs and a few like, “Please remove me from your list”… but I have never published any of them... until today, that is.

This photo from a minister somewhere in Australia who responds to every blog, came only with the title "Captain Cut-Throat". It rocked my ship with shrieks of laughter. Even my skunk, Perfume, is included in my personal portrait.

PS. If you haven't read my previous blog (just below this one) you won't have a clue to what this is all about... so arrow down a little.
Posted by Ralph Hiatt at 11:47 AM

Well, that’s literally what happened. The surgeon had to cut open my throat and clear out an 80 to 90% blocked carotid artery. That happened one week ago, Monday, February 6 at Memorial Hospital in Modesto, CA. 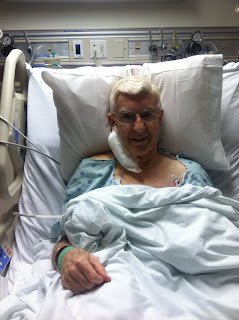 As I was being discharged from the hospital on Wednesday, the nurse asked me if I would like to have a pneumonia shot and a flu shot as long as I was right there. I felt great, so I said, “Why not?” A few minutes later I had a shot in each shoulder.

Perhaps it wasn’t the best time to do the shots, though. The surgeon wanted me to call him if my temperature rose to 101 degrees or higher in case infection should set in. What I didn’t think of was that perhaps the flu and pneumonia shots could cause a rise in body temperature. So the first several nights at home I was fighting with flu symptoms and a fever. I watched it closely and it never reached 101 degrees, but came very close.

Final word: Now all is back to normal: temperature, heart rate, blood pressure… except my energy level which is rising every day. And except the ugly lump on the right side of my neck… which they promise me will eventually disappear.

The only reason that this blockage was discovered was the slight stroke I had Christmas Day. The hospital found it as they did all the necessary tests, scans and MRI. Otherwise I would have returned to Argentina with this blockage posing a possible threat to my health while there.

Thank you, Lord, for bringing about the series of miracle-events that caused this serious blockage to be discovered. It’s true: “We know that in all things God works for the good of those who love him, who have been called according to his purpose."

Riding the wave of His blessing,

What a mix!
The two extremes of life’s spectrum, each with its challenges and blessings! 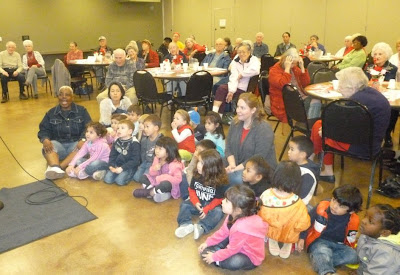 Little starters sit on the floor. They are just trying to figure what life is all about. 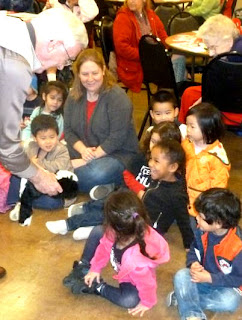 How can they get so much fun out of petting a “live” skunk?!

And a beautiful group of seniors watch the ceremony with delight and laugh as they listen to Felipe’s twisted Bible tales.
This is the second time Pastor Tom Witt has invited me to minister to his group of seniors at Bethel Church in San Jose. Both times they have brought in the pre-school kids to enjoy the first part with Perfume, the skunk, and Felipe.

Just before lunch was served I shared with the seniors the account of my personal “Secret Bethel,” “House of God” and “Door to Heaven.” Jesus was there. He never fails to bring His divine blessing. That must be why I’m having so much fun. 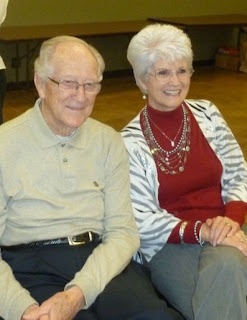 Pastor Tom and his lovely wife, Trella, have been serving for four years as pastors of the seniors of this great missionary church.


What a blessing they are! Trella even plays the piano for the singing. 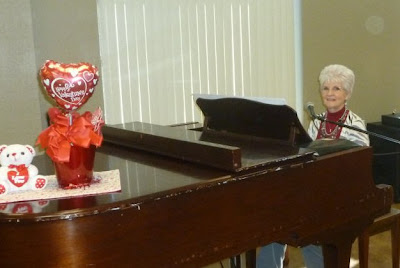