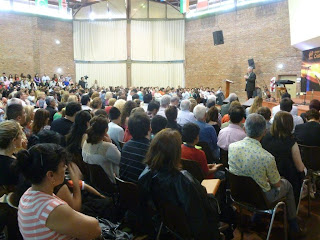 Missionary Donald Exley baptized 34 new converts after a powerful Sunday morning service.  The church school gym, presently used as a sactuary, is overflowing and the new sanctuary seating 2,000 will not be ready until end of 2013.
Following the service the baptismal took place in the Christian School patio. 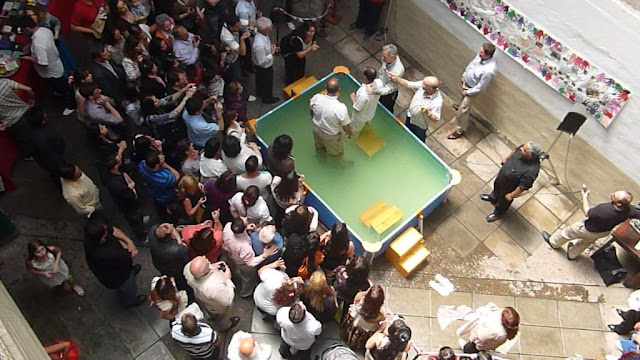 I shot some photos from the 3rd floor balcony where I was watching.  This brother being baptised is hearing impaired.  If you look carefully you may be able to see the woman who is translating Pastor Exley's words in front of him.  When he rose from the water he raised both his hands high moving them excitedly signing a “Silent Hallelujah!” and a shout of praise and applause filled the area as he embraced his pastor!  The Martinez Family Christian Center maintains a ministry of translating for the hearing impaired in every service. 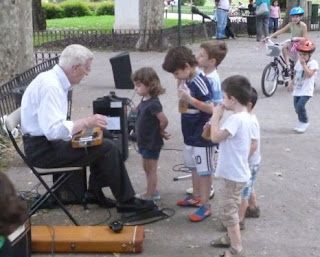 It was my joy to dedicate Sunday afternoon to bless an as yet "unborn church" in Devoto, a nice neighborhood of the Federal Capital Buenos Aires. I call it a "baby church" once it starts breathing on its own, but this one is still in the pregnancy stage.  First we did a meeting in the plaza.  The weather was perfect, however now a few hours later, lightning is flashing, thunder rolling and a torrential rain is literally flooding the streets! 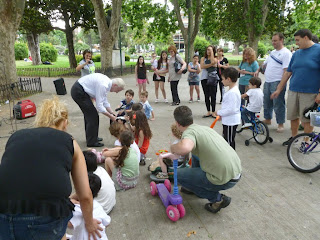 The kids loved petting Perfume.  And the crowd grew. 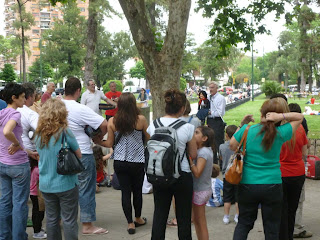 Felipe a sang and told a Bible Story and I preached briefly to the adults. 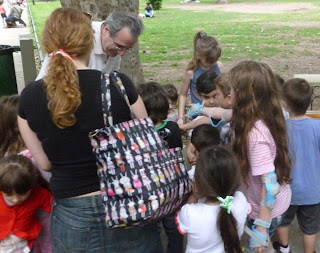 The kids crowded around to get a copy of the Spanish “Book of Life” edited especially for children. 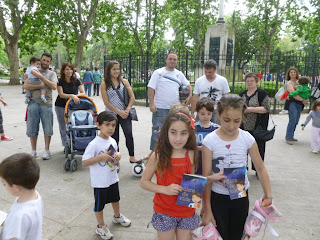 They each were delighted to have their copy. Then we moved to a rented hall a half block from the plaza where the pastors open the door weekly.  Delicious coffee was served to all. 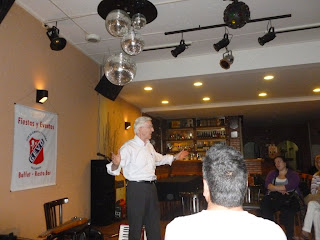 We enjoyed a worship service with their small group… mostly workers from the mother church.
Perfume, Felipe, the Hawaiian guitar and the accordion all did their thing and I enjoyed singing, preaching and praying with them.  Pastor and Mrs. Carlos Blanco will need our prayers as they attempt to bring to birth another AG church.


Tomorrow I drive 140 miles south to begin Monday evening with ministry in the southern part of the Buenos Aires Province.  I start with the original church that Alice Wood founded in the 1920s in the city called 25 de Mayo (“25th of May”). This area was the seedbed for our first Assemblies of God ministers during the early part of the 20th century.  I plan to preach each night in one of 14 cities during the next two weeks… plus a Saturday morning regional pastors meeting… then move on south and west to La Pampa Province… the only one of the 23 provinces (like states) left in Argentina where I have not ministered since Frances’ home-going two years ago.  It’s going to be a busy month hopping from hotel to hotel and church to church, but I am looking forward to it with great anticipation. 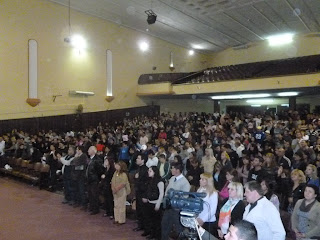 In many areas of Argentina the old movie theaters have been purchased to serve as churches.  Pastor Alberto Rey has started several churches in the last few years.  We helped him with one of them by raising some funds with a "Share Call."  I had this Tuesday free because of a cancelation and asked him for the privilege of ministering in this church at the last minute. Now he has invited me back for one of his several Sunday services.  Hey, you pastors in the USA... How would you like to have this crowd for your Tuesday night service?! 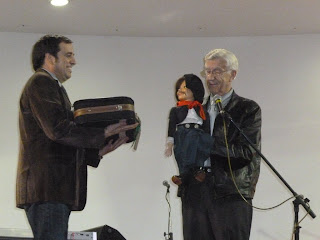 As usual I called the children to the front to see Felipe.  Pastor Alberto held the suitcase for me. 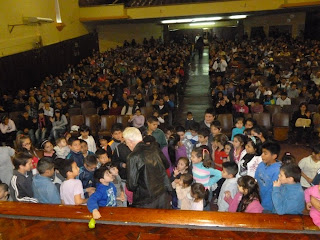 The kids crowded around me as I spoke to them about how the Lord was going to use their lives for His service. 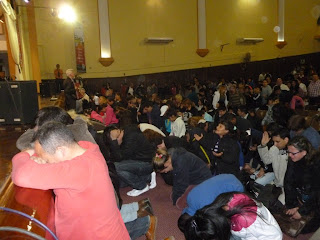 At the close God moved powerfully and the front was filled with people kneeling in prayer. 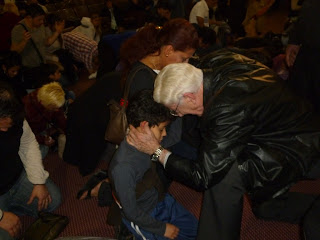 He was a sharp looking a young man.  It was hard to tell whether he was a teenager or maybe 21 years old.

The service was over.  Many lingered at the altar.  As often happens, puddles of tears spotted the cement floor where dozens had been kneeling in prayer.  Most of the people had hugged my neck and with deep emotion thanked me for my one-night visit to their church and their city.

He waited until almost everyone was gone.  I was packing up my Hawaiian guitar and amp on the platform.  I had not noticed him among the crowd previously.  He was obviously shaken emotionally.  He trembled as he spoke. His words still ring in my head and heart.  He hugged me and then pointed to the front door of the church and said, "Tonight I came in that door as an atheist.  I am now going out that same door as an evangelist!"  And the angels of heaven burst into song!  That was Saturday, night before last. 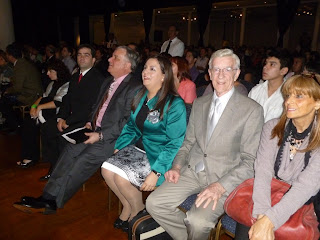 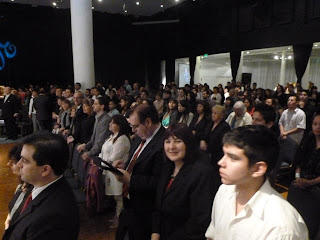 Last night, Sunday, I was with another man, Mario Morana (Bible in hand) and his lovely wife, Rosana, who were celebrating the 30th anniversary of their church.  An estimated 1,000 people were in attendance.

35 years ago, 1977, Mario was a teenage kid in a city plaza where we were preaching.  He gave his heart to Jesus along with many of his friends.  The angels burst into song!  His bride to be, Rosana, was only 11 years old and tells me now that she, too, was there in that same plaza surrendering to Jesus during that 30 day crusade.  After graduating from Bible School in 1982 Mario, still single, started the church in downtown Buenos Aires in a tent with our help.  Rosana was 15 years old and played the keyboard for the tent meetings.  I remember overhearing her giving loving, wise counsel to a woman from the street.  I was impressed with this couple long before they were married.

What a celebration last night! Many honored guests!  Gifts, plaques, videos of the past and even a cake!  They honored me and my late darling Frances and gave me a plaque and a beautiful watch!

What is happening in my life?  I usually write only after midnight.  I have little free time during the day.  Almost every night I am seeing youth crash at the altar and bury themselves in dedication to Christ's service.  Who knows what God may do through these new youth if Jesus tarries another few years?!  Anniversaries!  Gifts!  Hey, angels, get ready to celebrate with more singing!  For many more lost sinners will soon be bowing low at the foot of the cross!

Any time now I hope to join that heavenly choir.  But until then my heart will beat for the lost and the hopeless... and especially the young!

Ralph
Posted by Ralph Hiatt at 8:36 PM No comments:

I have a friend named Sam.  He senz me fun stuff.  I confess I cracked up under this one.

I rote him back: Hey Sam,

“Member.” That's what you can’t do very well when you get as old as me.
I tell you the truth, Sam, I don’t member when I laughed so hard out loud.  Hey, I gotta get Syrias.  I gotta do sum preechin in a few hours.
What’s that ya sayin?  Yeah, I know it’s Monday… but I eat almost every day, so I think it’s okay to go out and do some preechin every day, too.  I do it for fun.  It’s cheaper than golfin.

Ralph
(Note to all rednecks:  Please do not take offense.  Truth is I don't even know what a redneck is.  I might even be one.  Ralph)

Oh yeah!  One more think: My friend, Sam's last name is "Balius" which is what we do when our boat is sinkin.